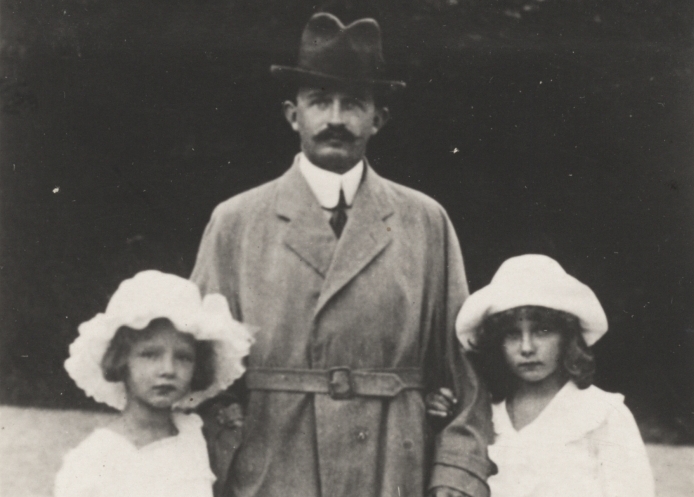 One hundred years ago Charles IV, the last Hungarian king, tried to return to the throne of Hungary. This event – which was closely monitored by the international public at Easter 1921 – and also the second attempt in October of the same year, was thoroughly explored by historical research.[1] But while the scientific research approaches the events from the perspective of political history, Charles IV’s family and children are mostly just briefly mentioned. However, based on the interviews, speeches and biographies analysing the life of the Crown Prince – found in the collection of the Otto von Habsburg Foundation – it seems interesting to revive the events from a hundred years ago from the perspective of Charles IV’s eldest, eight-year-old son.

The family arrived in Switzerland on Monday, March 24, 1919. With the contribution of the King of England, Colonel Edward Lisle Strutt organized the travel of the former ruler of the Austro-Hungarian Monarchy and his relatives to the Swiss Confederation – the first stop of their emigration. Charles IV and his family were initially rejected by Bern in 1918, but were eventually granted asylum under British pressure[2] as long as “certain conditions” had met. Switzerland obliged the former ruler of the Austro-Hungarian Monarchy to settle in a place far from the Austrian border and not to engage in political activity, preferably to remain “discreet”. At that time, it was not yet required of Charles IV to give prior notice to the authorities when leaving the country. Later, however, after the first unsuccessful coup, this approach changed and he was obliged to report his intention to travel abroad. 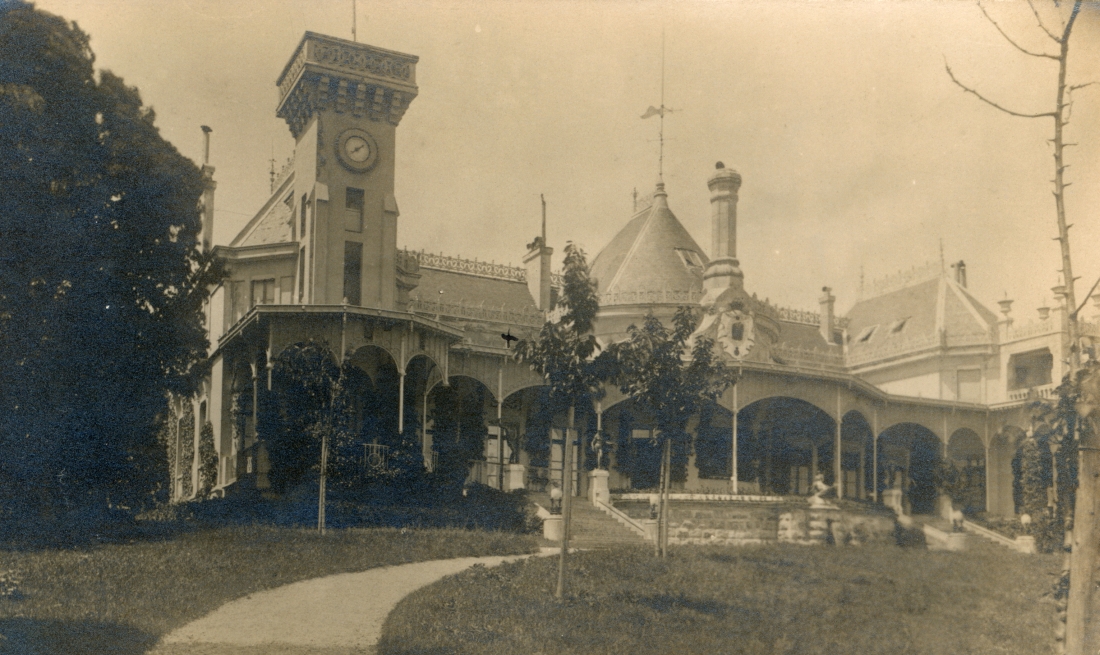 First, the Royal couple and their children spent six weeks at the Wartegg Castle, owned by the Parma family, and then rented[3] the Villa Prangins on the shores of Lake Geneva, far from the Swiss-Austrian border, in accordance with the requirements set by the Swiss government. On May 20, the king and his entourage moved into a spacious residence in the canton of Vaud, built in 1861 by Napoleon Bonaparte’s brother. Together with the staff the number of residents in the building was 50.[4] The garden of the villa was in direct contact with the lake, which was a great pleasure for the children. Otto von Habsburg, who was asked several times about this period, recalled 80 years later: “The summer in Prangins was very beautiful. We were gardening and fishing a lot. It was especially unforgettable for me because I started fishing there.”[5] He also remembered that the villa was surrounded by a huge park where they could play to their liking, and that from the window of the residence they could see the snow-capped peak of Mont Blanc. Otto recalled that many had visited his parents around this time, but most of all he recalled the memories of his uncles, and the presence of his grandmother, Archduchess Maria Josepha of Saxony.[6]

The Habsburg children lived quite secluded; being private students, they did not attend Swiss education. Otto later confirmed this in an interview by Gábor Hanák and Péter Bokor.[7] Count Miklós Esterházy, Crescence Marie Markgräfin von Pallavicini and Charles IV taught him Hungarian.[8] At the suggestion of the Primate of Esztergom János Csernoch, in 1921 Father Pál Zsámboky became the Hungarian teacher of the Crown Prince. The family lived according to a strict agenda and the firstborn was brought up with a particularly high discipline. It was a lifelong experience for Otto that he could walk with his father for an hour every morning during this period. On these occasions, Charles often spoke Hungarian. Otto was introduced to German grammar by a Tyrolean teacher named Dietrich.[9] The family spent a lot of time together, which was fundamental for the then 7–8-year-old Crown Prince. On March 1, 1921, his seventh sibling, Archduchess Charlotte was born, which gave special occupation to Queen Zita and the family. 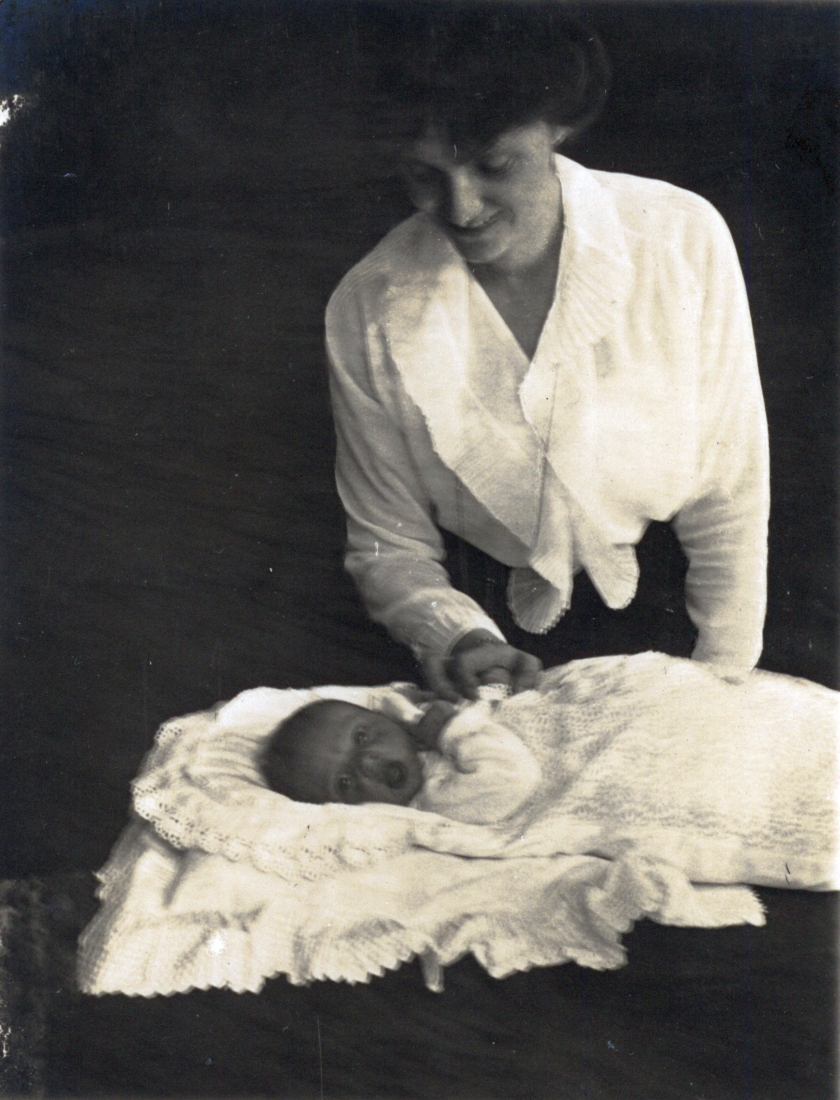 The children did not notice anything peculiar during these seemingly idyllic months. It was not uncommon for them that their father did not show up at the family table occasionally, so they did not notice his absence either when it happened on Good Friday morning, March 25, 1921. Despite what can be read in some writings that Otto was initiated into their parents’ plans,[10] the Crown Prince did not know the reason for his father’s absence.[11] However, it was strange for him that Easter was also celebrated without Charles in the chapel of the Villa Prangins, as the family had spent major holidays rather together.

Otto, then eight years old, must have been surprised that on March 30, two Swiss police chiefs made an unexpected visit to the villa and they, the children, were also questioned about their father. The press had already reported Charles’s presence in Hungary, but the children were not introduced to the details yet.[12] Otto may have noticed that in the first days of April, the comings and goings around the residence revived.[13] Queen Zita, as soon as she received the telegram on her husband’s failed coup and his return to Switzerland, left the villa early in the morning on April 6, but asked Countess Teréz Korff-Schmising-Kerssenbrock, a Lady of the Court who played an important role in raising her children, to tell those who had stayed home: they both will soon return. 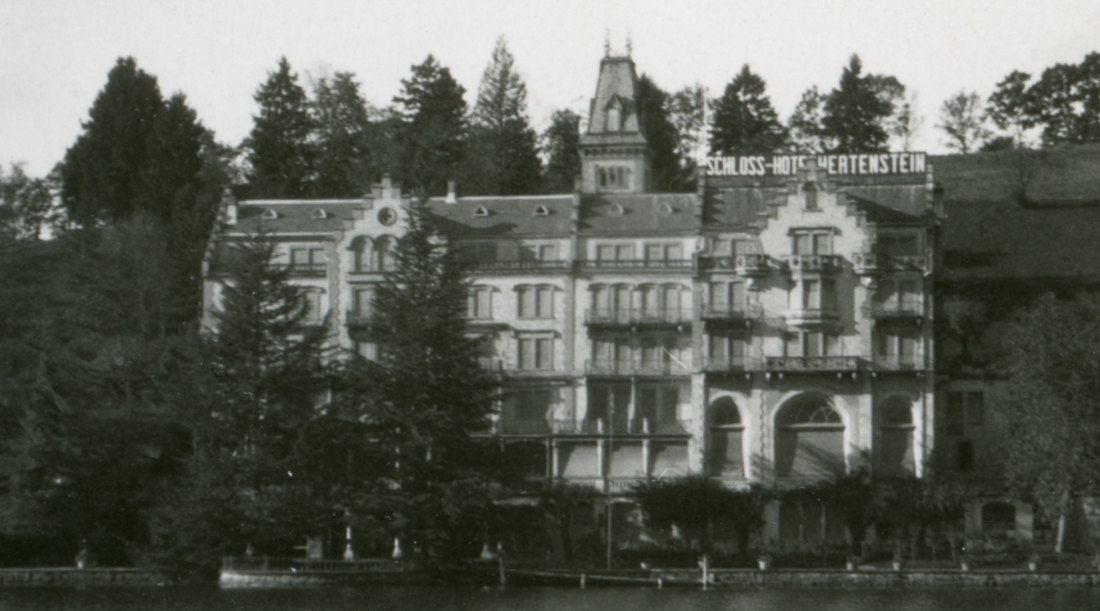 So, Otto, on the morning of April 6, hoped to see his parents in Prangins again in a day or two. However, the Royal couple never returned to the villa at Lake Geneva together – the leadership of the canton of Vaud protested against the return of Charles,[14] only Catholic cantons – Fribourg, Lucerne – were willing to accept the Habsburg ruler. As a result, he and Zita, who boarded the train of her husband at the Austro-Swiss border station, Buchs, arrived in Lucerne – between the Pilates and Rigi mountains – around one o’clock in the morning on April 7, 1921. They were temporarily housed in the elegant Hotel National, and Charles stayed there under police supervision for a good month.[15] From there, the couple moved to the Hertenstein residence on May 5, 1921, which was rented out for the family’s further stay in Switzerland. Charles promised to leave the Federal Republic by the end of August.[16] The Swiss government later extended the ruler’s residence permit because he gave his word that he would refrain from any unauthorized activity.[17]

Aladár Boroviczény, the head of the cabinet of Hungarian Foreign Minister Gusztáv Gratz at the time of the first attempted coup, accompanied Charles IV to Switzerland and reported that Otto had unexpectedly left the Villa Prangins on April 9. The Crown Prince was transported to Lucerne at Zita’s request. Countess Ágnes Schönborn, who later married Boroviczény, joined the family as a Lady of the Court in 1921 and took Otto with her from the villa. The Queen’s aim was to cheer up her particularly desperate husband with their son’s surprise appearance. Otto arrived at the Hotel National at dinner and his father indeed cheered up by seeing him.[18] The Crown Prince returned to Lake Geneva with his mother a few days later. The children left the Villa Prangins on May 5 and moved to Hertenstein, where the family could be together again.[19] Otto was delighted to be living on the waterfront again and to be able to revive their usual walks with his father, although they had less time for it there. In Hertenstein, “one of the rooms in the children’s suite was arranged as a school room by the order of Queen Zita. Along one wall stood a large blackboard, and in front of it were three small school benches for Crown Prince Otto, Royal Princess Adelheid and Royal Prince Robert.”[20] The Crown Prince was also cheered by the fact that his Hungarian studies with Pál Zsámboky continued. 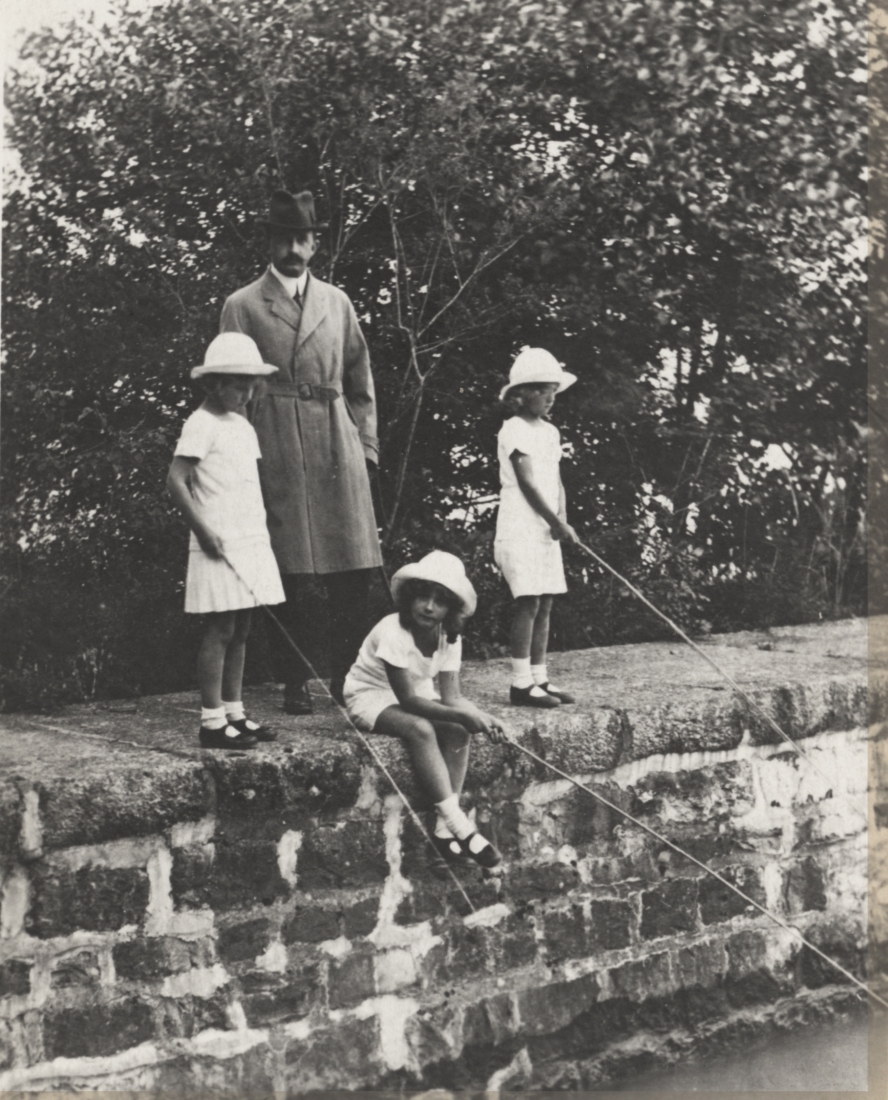 Otto was able to continue his passion for fishing, which was especially important to him at this time. In addition to the Swiss police, the castle hotel was also monitored by agents of Miklós Horthy,[21] who repeatedly tried to obtain information about Charles’s intentions by camouflaging themselves as tourists. In an interview in 1998, Otto recalled how pleased he was to be able to exchange words in Hungarian with the stranger who turned to him – with Detective Inspector Oszkár Zdeborsky. The Hungarian agent tried to extort information from him, but as his parents warned him not to converse with these “tourists”, he later avoided them.[22]

Otto was able to live with his parents as a happy child until the end of October 1921, even if he felt a more tense atmosphere from April. Charles’s second coup attempt ended their stay in Switzerland, of which the Crown Prince was also unaware.[23] The Royal couple, who left on October 20, 1921, did not tell the children where they were going just before the expiration of the Swiss residence permit,[24] but thanks to the press, their destination was soon revealed. Otto was concerned about the events and he was waiting anxiously for his parents’ response to their letter that they wrote together with his siblings. Zita’s lines for her children, which she had great difficulty sending after the failed coup, were detained by the Swiss authorities for weeks. The Swiss police were surprised by Otto’s answers and cleverness when he was interrogated at the end of October 1921.[25] On 8 November, eighteen days after the leaving of the Royal couple, the children also had to leave Hertenstein and were temporarily returned to Wartegg Castle. It was a great pain to Otto that his paternal grandmother was banned from them.[26] The Crown Prince celebrated his ninth birthday in the absence of his parents in Wartegg and Christmas also passed without them.[27] Queen Zita travelled to Zurich on 12 January 1922 for Archduke Robert’s caecal surgery after receiving permit from the Conference of Ambassadors meeting in Paris and the Government of the Swiss Confederation. Here she was able to meet Otto and his siblings for a short visit, but the authorities did not allow them to travel to Portugal together.[28] The Crown Prince and his three siblings left Switzerland by train through Geneva to France on January 26, 1921, to see their parents on the island of Madeira, but it did not happen until February 2, 1922.[29] This marked the beginning of a new era in Otto’s life. 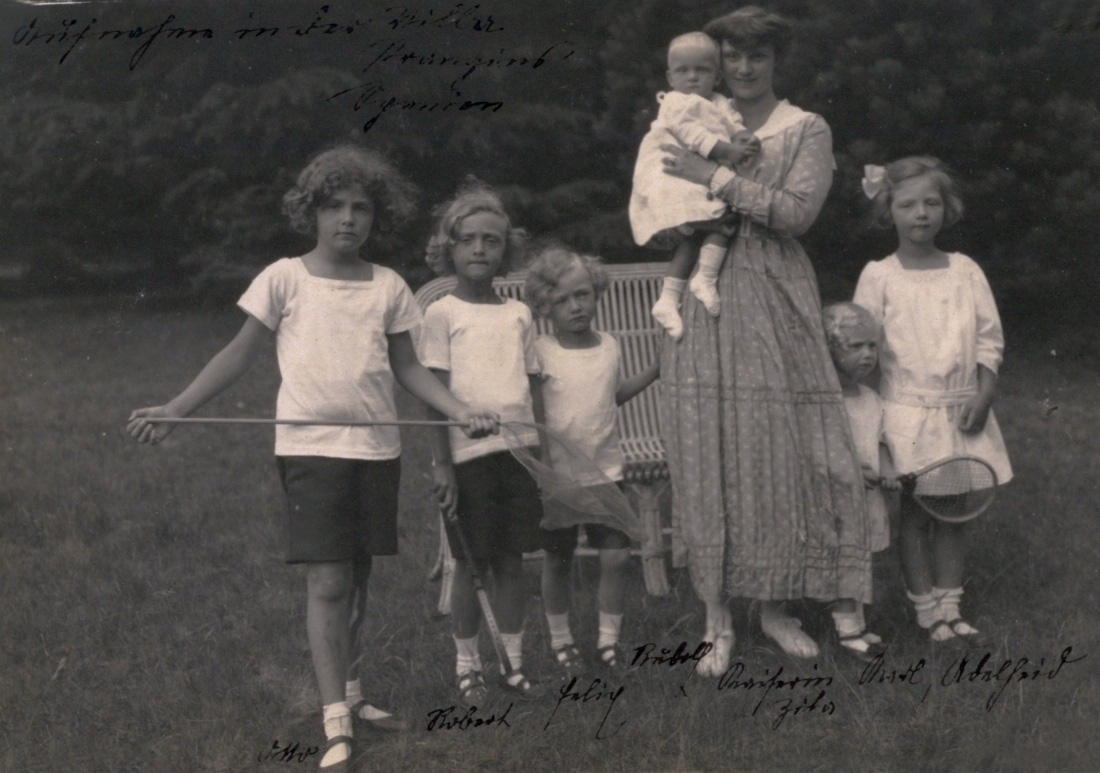 Queen Zita with her children in Prangins

The events from 100 years ago were later analysed several times by the former Crown Prince, from an adult’s point of view. Among others, he stated, “the first attempt failed because they believed Horthy, and that was a mistake. The second was poorly designed. […] It was a very amateur thing. At the same time, it is necessary to see the coercive conditions to which the individuals concerned were exposed. And then, in retrospect, we will be lenient when we think about what we would have done in their place.”[30]

In a lecture given at a scientific conference in Reims, France in October 1975, Otto stated in connection with the events of 1921:

“For Charles von Habsburg, the coronation had an inseparable and perfectly complementary sacred and political character. In fact, politics without moral attachment necessarily leads to tyranny. The oath creates an insoluble bond with God that reminds us of the priesthood. This is the real explanation for the two attempted coups in 1921. Because of his oath to the constitution, the king felt obliged to keep himself to his vows in every way possible, even against personal and family ties and all political options.”[31]

In Otto’s memories his father’s attempts to return — howsoever it meant an ordeal for him — remained not as a difficult chapter of his life, but rather as a kind of moral heritage, a historical lesson.

[17] Charles IV was to be sent to Spain. The Spanish government has indicated that the castle they can provide for the Habsburg family will be put in order by October. Ormos, p 87-88

The Crown Prince, who followed the principle of “healthy so 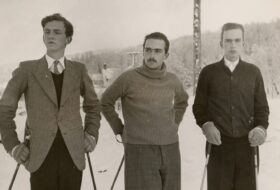 Our documentary presents a micro historical case typical of 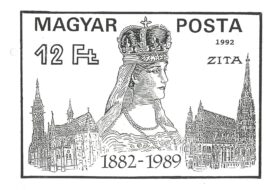