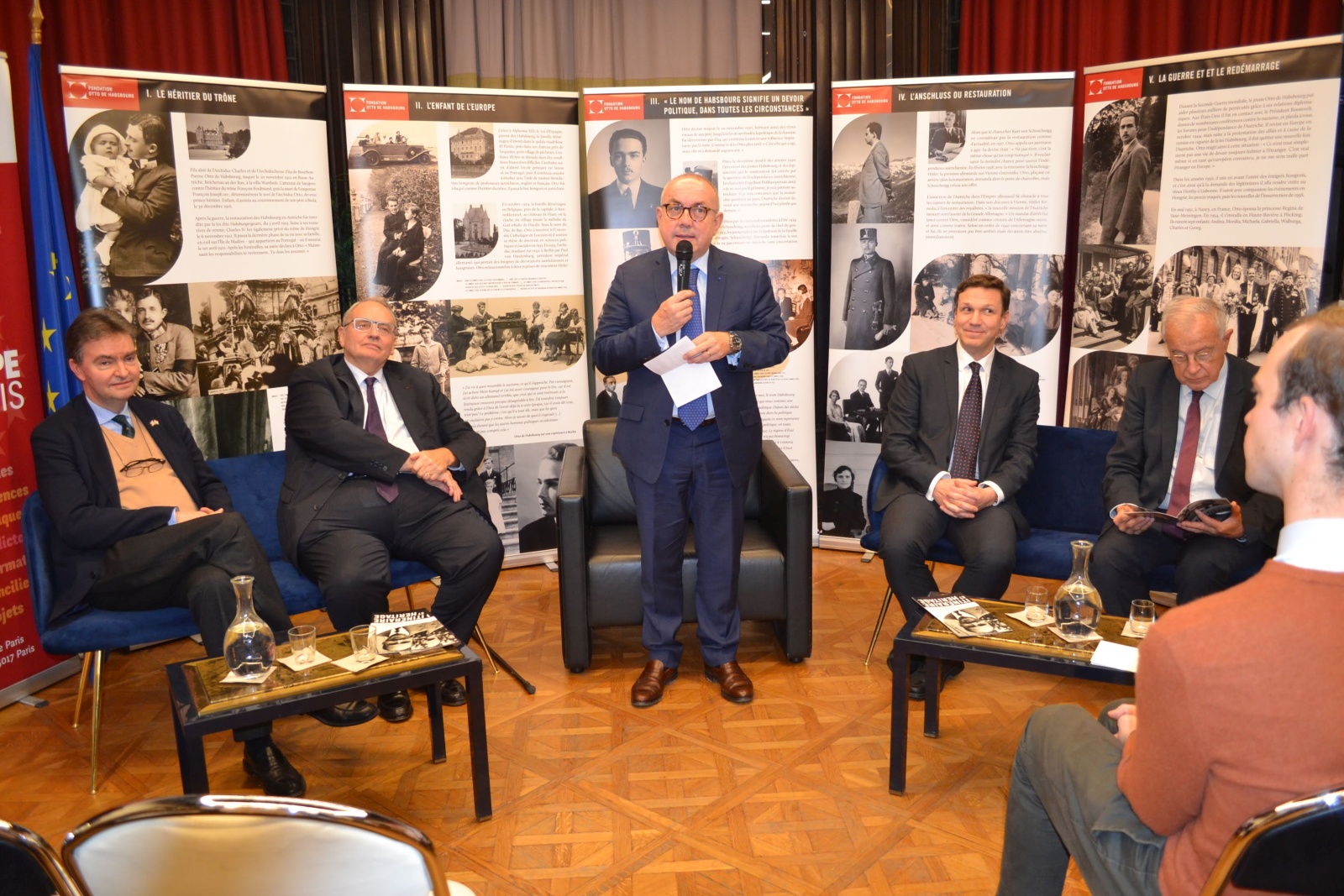 After the brief welcome, Alain Lamassoure spoke first on the issue of “unité dans la diversité” (unity in diversity). He stressed that this principle was best understood and implemented by Otto von Habsburg. He recalled the friendly relationship between Valéry Giscard d’Estaing, former President of the French Republic, and the former Crown Prince, which he had personally witnessed. Lamassoure highlighted the role of Otto von Habsburg during the period of regime change, especially in 1989. The former French minister for Europe recalled that the son of the last Hungarian king was a very good analyst, who foresaw the fall of the Soviet Union clearly at the beginning of the Cold War. In his view, he was able to use his experience and historical knowledge of the past to understand the present and to help the future. Otto von Habsburg never saw uniformity as a means of creating political unity, but rather the strengthening of different identities (such as national identity), combined with tolerance and subsidiarity. Lamassoure concluded by saying that the spiritual and political legacy of the former heir to the throne, and in particular his quest for unity, were inseparable and could only be understood together.

In his presentation, Jean-Louis Bourlanges recalled his encounters with Otto von Habsburg, when they were both Members of the European Parliament. He mentioned that it was in this role that he had visited Funchal and visited the tomb of the last monarch of the Austro-Hungarian Empire, at the instigation of the former Crown Prince. He recalled working in a delegation with Otto von Habsburg during the South Slavic wars, from whom he heard extremely wise analyses of the Balkans and shared his fears for Bosnia’s future. The thoughts and ‘prophecies’ he expressed at the time became reality a few years later.

Bourlanges also spoke at length about the stabilising role of the Austro-Hungarian Empire in Europe. He noted that French Prime Minister Georges Clemenceau – whom he admires for other things – made fatally flawed decisions after the First World War. One of the victims of these was Hungary. The speaker stated that Otto von Habsburg was able to keep both the federalist ideal and national sovereignty in mind, an approach that is still much needed among policy makers today. According to Bourlanges, Otto von Habsburg thought about the future of Europe on the basis of the ancient Greco-Judeo-Christian civilisation. These common European values should continue to be the guiding principles of our common construction. The speaker said that the most important characteristic of Otto von Habsburg’s personality was his optimism, which never let him down in the most difficult situations. We can learn from him even today, when so many difficulties take away our zest for life. The lesson of the former heir to the throne’s enormous work ethic is that nothing is free, and it takes hard work to go from one to two in the political arena. He explained that even if there are differences on certain issues between him – meaning the official French position – and some countries in Central Europe, he personally believes that these can be overcome through dialogue and the spirit of Otto von Habsburg. The former heir to the throne’s historical vision and his vast knowledge have helped Boruanges on many occasions to analyse the challenges of the present and to formulate forward-looking advice.

Georg von Habsburg, Hungarian Ambassador in Paris, remembered his father in a personal tribute. In his speech, he highlighted the issue of subsidiarity as a very important principle for his father, which can still be a guiding line in the politics of our continent. Like Bourlanges, he stressed that Otto was never a pessimist, even if he was despised and rejected by others.

Gergely Fejérdy, Deputy Director of the Otto von Habsburg Foundation, the moderator of the event, briefly recalled the rich life of Otto von Habsburg by presenting the tabloids of the exhibition. He pointed out that, although the former heir to the throne did not have the opportunity to lead his countries from a palace, he did his utmost to be the builder of a united Europe based on Christian civilisation.

At the reception after the event, the possibility of presenting the exhibition in other venues in France was raised.

The Deputy Director of our Foundation took advantage of his stay in Paris to meet with several French personalities and representatives of institutions to discuss possible cooperation in 2023. Among others, he met with the leaders of the Charles de Gaulle Foundation and with Pascale Andreani, former French Ambassador to Budapest. He also had the opportunity to talk to Jean Sevillia, one of the best-known French historians on the Habsburg family. Sevillia spoke about his experiences with Otto von Habsburg and they agreed to help each other in their work and that the renowned French researcher would visit Budapest as soon as possible.

Gergely Fejérdy also had a meeting with Elizabeth Monfort. She also met Otto von Habsburg as an MEP and has since written several books on Emperor Charles I and Queen Zita. The MEP shared valuable information about the former heir to the throne and his family, in particular the links with France.

The conference and exhibition held in Paris on the occasion of the 110th anniversary of the birth of Otto von Habsburg contributed significantly to raising awareness of our Foundation’s activities in French-speaking, academic and public circles, and – in fulfilling our mission – not only to preserve but also to transmit the intellectual and political heritage of the former Crown Prince.

Commemoration of Charles IV in Porto

On 6 December 2022, the Embassy of Hungary in Lisbon, in cooperation with the Portuguese Catholic University in Porto, organized a conference on the occasion of the centenary of the death of Blessed Charles IV, where the exhibition ‘Life and Memory’, compiled by the Otto von Habsburg Foundation, was presented. 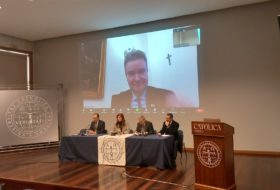 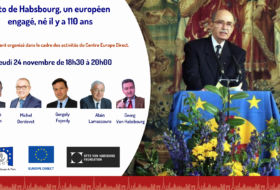