The Treaty on European Union put an end to years of negotiations in which the 12 Member States had sought to take into account the consequences of the fall of the Iron Curtain, alongside many domestic policy considerations. In addition to the strengthening of the European Communities, i.e. the right of free movement and settlement within the Union, the document established the framework for two other pillars: the common foreign and security policy and judicial and legal cooperation. It took a decisive step towards the introduction of the euro and set out the economic conditions for its adoption; and by creating the European Central Bank, it sought to ensure coordination between the monetary policies of individual Member States.

An important development is that for the first time the Maastricht Treaty includes the concept of subsidiarity, which originally appeared in a theological context, in Pope Pius XI’s 1931 encyclical Quadragesimo anno.

This was the principle that the Maastricht Treaty sought to establish in the functioning of the European Union, as a response to the debates that had been going on for 30 years about what common principle could be accepted by those committed to a federal Europe and national sovereignty. From Helmut Kohl’s memoirs we know how the Bundesstaat / Staatenbund (federal state / confederation of states) dilemma had been a source of tension within Germany; but the main argument that confronted Kohl – originally a believer in a federal Europe – with the realities of the nation state was France’s attitude.

Otto von Habsburg analysed and evaluated the document signed 30 years ago in several articles. He stressed that for him, the two most important elements were the establishment of the European Central Bank and the acceptance of the principle of subsidiarity. He had already committed himself to both causes in his earlier writings, drawing on the dynastic experience he had formulated in his monograph on Emperor Charles V (1967): the functioning and survival of a larger empire or community of states can only be ensured if appropriate mechanisms are in place to even out economic differences and if the decision-making capacity and ambition of smaller units is not arbitrarily overridden by a higher power. Otto von Habsburg repeatedly emphasises the merits of his good friend Valery Giscard d’Estaing, former President of the French Republic, in the conclusion of the treaty. However, he spares no vitriolic remarks when writing about the style of the text of the document.

“The text is written in such a terrible bureaucratic language that any sane person will put it aside in anger after reading the third page at the latest,” – says Otto.

In the course of our Foundation’s activities in 2022, we plan to address the issue of subsidiarity on several occasions, as we see it as an important signpost in today’s debates.

Volker Kauder, who served as parliamentary group leader of the ruling CDU/CSU faction in the German Bundestag from 2005 to 2018, visited our foundation. 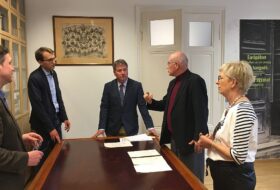 The twenty-year period during which Otto von Habsburg was a Member of the European Parliament, starting in 1979, was an important stage in his political career. During a visit to the Historical Archives of the European Union, we had the opportunity to look at the collection and discuss possibilities for inter-institutional cooperation. 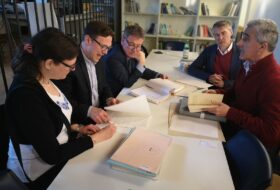